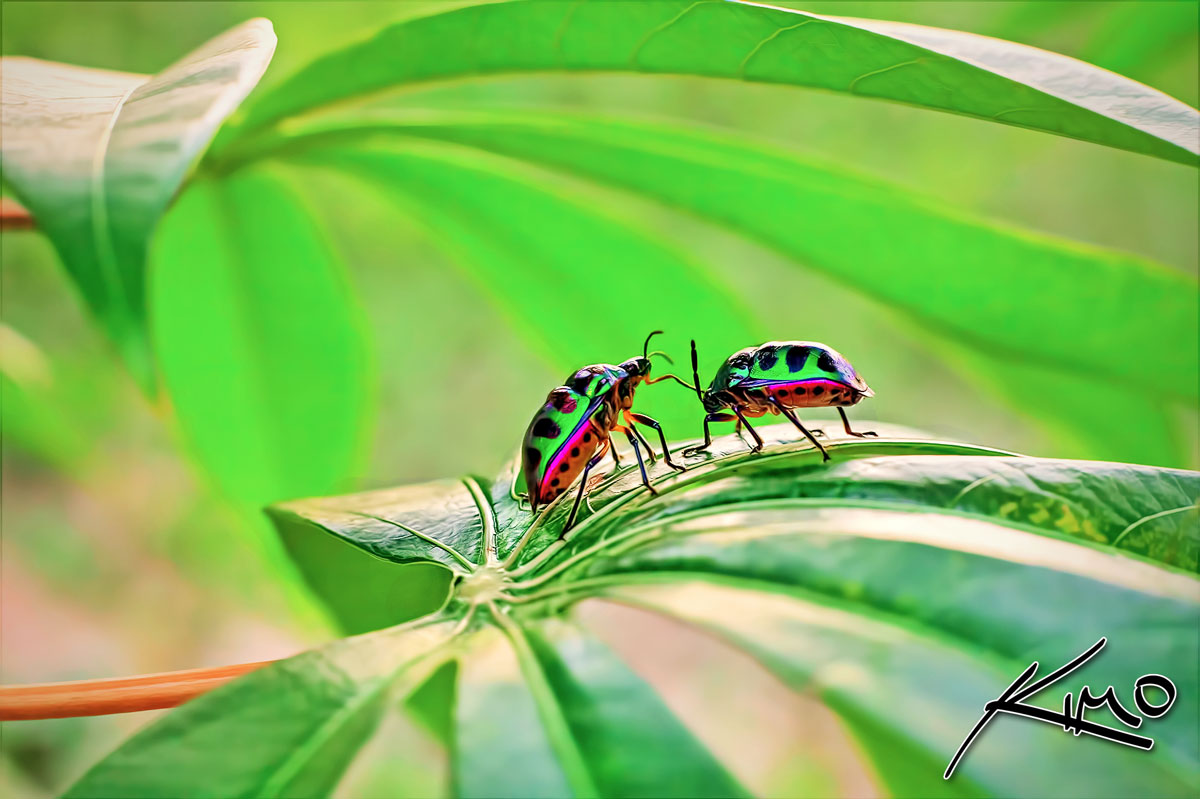 Green Jewel Bug in a Field of Potatoes, Thailand

I was walking through a field of potatoes next to Grandma’s house when I spotted these two green buggers perched on a potato leaf. I’ve never seen green beetles like these before, especially with a bright magenta colored bottom. Their colors were so vibrant, it seemed like someone had spray painted them with neon paint.

Did some research and found out they are called Green Jewel Bugs, not sure if they are beetles or not. I’m not a bug expert ;-)

I wasn’t quite sure what they were doing. All I knew was that I had my wide angle lens and that wasn’t going to fly with this shot. I quickly ran back into the house to grab my extension tube and my 50mm lens. An extension tube, for those who don’t know, allows me to convert my 50mm lens into a marco lens. I would rather prefer a real macro lens but this setup was more convenient for travel.

Once I got back the Green Jewel Bugs looked like they were having a territorial dispute. They were too occupied with their dispute to worry about me hovering over them with my camera. They hardest part about getting this shot was the low light due to sunset hours.

Luckily my 50mm had a large 1.8 aperture allowing me let more light in than any of my other lenses. Even still I was force to increase my ISO to 400, which I really didn’t want to do with a close up like this. But it was the only way for me to get the speed necessary to get a clean sharp exposure. There’s still a slight blur around one of the bug antennas but it doesn’t bother me that much.

I used my Photoshop action for this shot, since my other close up shot came out so well… the one of the butterfly. This photo came out okay, not as cool as the butterfly but it has it’s own uniqueness.

This was a single exposure HDR tone mapped using Photomatix Pro. I blended in the original exposure which I applied Topaz Denoise on to remove some of the noise caused by using a high ISO.

Usually my Canon 5D is pretty amazing at 400 ISO but I was bracketing with this shot and had to use the under exposure image because that was the sharpest of the bunch. However with a little creative processing I was able to reduce the noise and keep the processing blur to a minimum.