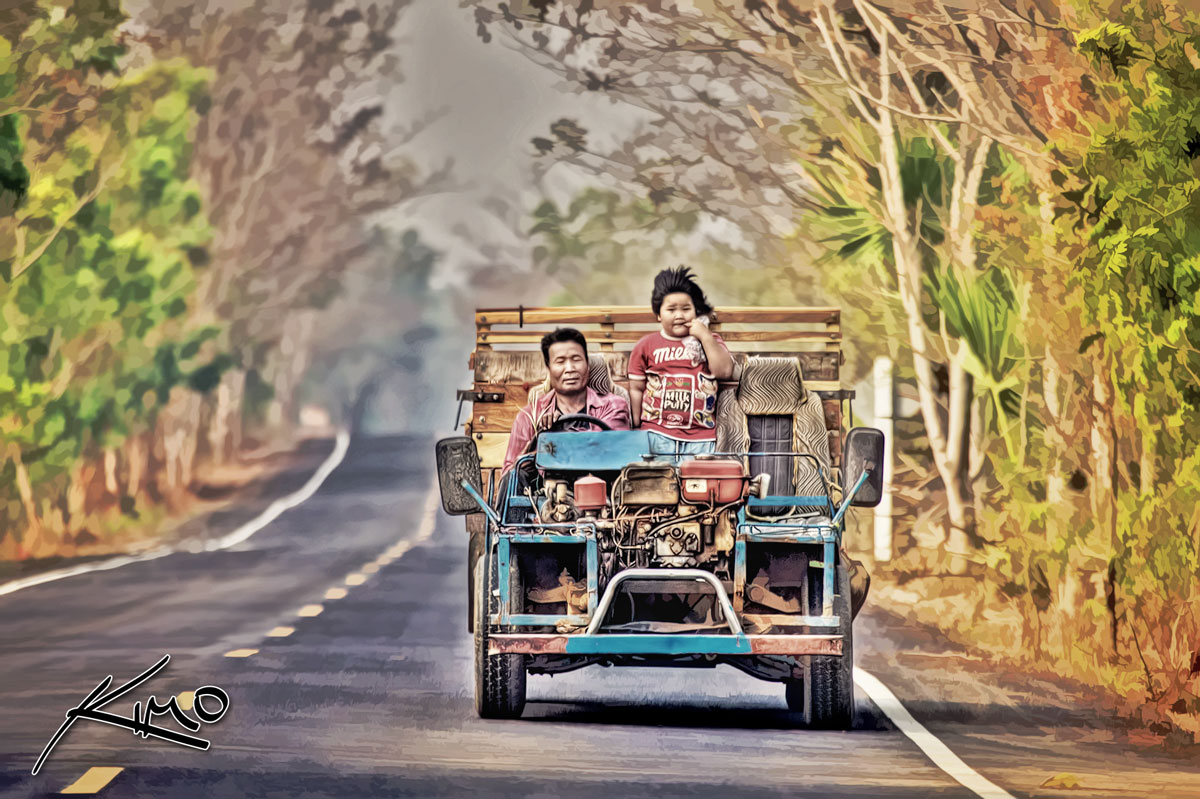 Country Roads No Rules in Thailand

In Thailand safety isn’t much of a concern. Most people out in the country are way too laid back, especially when it comes to driving on the roads. But strange as this may seem, I’ve yet to see any accidents. I did however see one in Bangkok, a bus collided head on into a Mercedes Benz, nothing major. But in Bangkok that was expected considering the amount of traffic and insane drivers there. Honestly… I was surprised I only saw one.

Out in the country, the roads here are fair game to anyone with a moving vehicle, including tractors. I was looking forward to seeing some cattle driven wagons but haven’t seen any. I’m guessing they’ve been outdated by the multipurpose tractor that I posted earlier. Most vehicles that occupy the country roads are scooters and motorcycles, followed by small cars and trucks. Farm tractors are also frequently seen along with buses and tour vans.

The roads here do have speed limits, but no one enforces them out in the country, so you can drive as fast as you dare. Most vehicles travel an average speed of 40-60mph. Right of way is given to those who want to travel faster. There are just as many people driving 10-20mph as there are people driving 70-80mph. I don’t suggest driving fast as the road condition is unpredictable with large pot holes and animals roaming about.

Drivers in Thailand use their horns openly to communicate with other folks on the road. The horn is also encouraged for alerting those in front that you are approaching. Try honking the horn in America and you’ll get a middle finger. For some reason using the horn in America is a rude gesture and can get you shot if you honk at the wrong person.

This photo was shot from the back of a small truck. I love riding in the bed of a truck while it’s driving through the country. There are so many things to shoot and they all require quick reaction and good aim. I shoot from a moving vehicle primarily to practice my reaction time and aiming skills. I can’t tell you how many great shots I’ve miss due to slow reaction and lousy aim. I don’t expect to get any great shots from my practice, but every now and then, I get something worth while.

As most of you already know I’m working on a new Photoshop Action for processing portraits and people. This action can be very artistic and surreal, but that’s what I’m aiming for. For me as long as the processing adds to images then I’m moving in the right direction. I used my new action on this photo with some tweaking. These adjustment will be added to the final PS action. I can’t wait to run it again on another image!