This post is a comparison of the latest prosumer SLR cameras from the top four companies; Canon 7D, Nikon D300s, Pentax K-7 and Sony a550. Since both my current cameras have broken during my Southeast Asia trip, I’ve taken some time to look at my choices.
[ad#Google Adsense-3]

I wrote this article to help me decide on a DSLR most suitable for my needs. I put together a chart with a side by side comparison of the four competing cameras. These cameras are targeting serious amateurs and professional photographers. The features and specs listed on the chart are a few deciding factors for my purchase.

Note: I did not do a personal tests on any camera, but I did do extensive research on all the models. Any advice from this post is simply my opinion or speculation. Some camera specs might be off so do your own research before you make any purchase.

Below is the comparison chart I created to list all the features of each camera side by side. You can also download a PDF version of this comparison chart by clicking the link below:
Digital SLR Camera Comparison;
Canon 7D, Nikon D300s, Pentax K-7, Sony a550 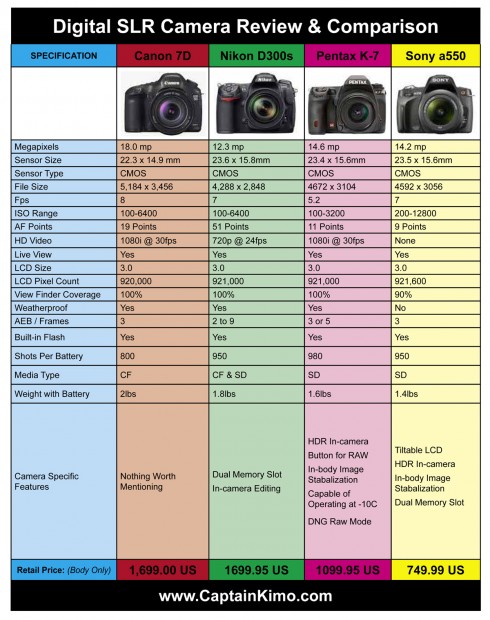 Canon 7D – Canon has a large portion of the DSLR market so purchasing a Canon camera isn’t a bad choice. That was the major reason I purchased Canon in the first place. They also have a large infrastructure, for instance; the quality and quantity of their lenses, their superior customer service (from what I’ve experienced), large user group (probably the largest out of the four) and aftermarket accessories (the biggest available). As for the camera itself; 18 megapixel is the largest file output of all the cameras. If for some reason this is important to you, than this is the camera for you. But make a note that even thought it has the largest MP size the sensor size is the smallest of the four. The 7D also shoots at a whopping 8fps, making it the fastest of the bunch. Ideal for sports photographers and wild life shooters. Canon is a good brand and is known for it’s excellence in image quality. You can’t go wrong by buying a Canon, but you will pay a premium price.

Nikon D300s – Nikon the second biggest name in the DSLR market, is known for it’s image quality, and as far as I can tell, the Nikon D300s has the best IQ of them all. After downloading many sample photos from each camera, I have come to the conclusion that the D300s has the best IQ. However, the difference in the image quality isn’t that noticeable from the other competing brands. The D300s is also a good choice because it’s a second generation model of the Nikon D300. A camera that has proven itself in the field for quality and durability. Unlike the Canon 7D, which is a completely new camera built from the ground up, which isn’t necessarily a bad thing.

Pentax K-7 – Pentax was late into the digital market, but they have come a long way with their digital SLR cameras. Out of all the SLRs, the Pentax K-7 has the most features and options. Where Canon and Nikon seem to spend their time focusing on profitability of their cameras, Pentax seems to care about what photographer’s really want in their DSLRs. I’m glad there’s a company like Pentax, paving the way for innovation and usability. If you’re looking for a feature rich camera that will conform to your needs, the Pentax K-7 will make you a very happy photographer.

Sony a550 – Sony is also a very big name, just not in the DSLR sector. But I expect things to change in the upcoming years as Sony starts undercutting their competitors and aggressively pushing their line of digital SLR cameras. I don’t blame them since the digital camera market is a billion dollar industry. As for the Sony a550, it has most of the feature that Pentax has and the same specs as all the other camera. High ISO and tiltable LCD is also a plus. The only thing it doesn’t have is video, which seems kinda silly to me. But then again it is priced way below the other cameras, which means it’ll give Canon and Nikon a run for their money.

All these cameras have made significant improvement over their older predecessor.The features and abilities of each camera have all come along way from when the first digital SLRs arrived. You can’t really go wrong purchasing any one of these cameras.

My recommendation to everyone would be to figure out what you photograph most and pick the best camera that suits your photography style.

As for me, none of these cameras will be a big improvement to my photography. It’s worth it for me to wait and simply spend the few hundred dollars to fix my broken cameras. Especially considering my initial investment into Canon products.

Another reason I’ve decided to hold off from buying a new camera is because of Photokina. Photokina is a major photography convention happening in September of this year (2010). Most likely the major camera companies (Canon, Nikon, Pentax & Sony) will reveal their new line of digital SLRs during this event. It also makes sense since the following months are the biggest consumer months of the year.

So for those of you who can wait, it’s probably a good idea to do so. It would suck if you bought a new camera only for it to be outdated in a couple of months by a new model!

A Little Side Note on Image Quality (IQ)

When it comes down to image quality, I notice little difference compare to my older Canon 5D MK1. Due to the size of the 5D’s full frame sensor, it still competes very well with today’s cameras. To learn more about full-frame sensors read my post here: Full Frame Camera vs Cropped Sensor

To be honest, rather than spending $1700 on one of the cameras above, I would instead buy the Sony a850, which goes for $1900, making it the most affordable full frame camera in today’s market.

For those interested in full frame cameras, three cameras come to mind; Canon 5D MKII, Nikon D700 and the affordable Sony a850. But keep in mind you will be paying more for these cameras than you would compared to the ones in this review… except for, maybe, the Sony a850.

Full frame might produce better image quality, but if you don’t plan on using it for commercial purposes or printing large posters, than I see no reason to buy one. Full frame cameras are expensive and not worth the money if all you’re doing is printing 8×10 images and posting images to the web.

Below are links to the official product page for each digital SLR camera reviewed.